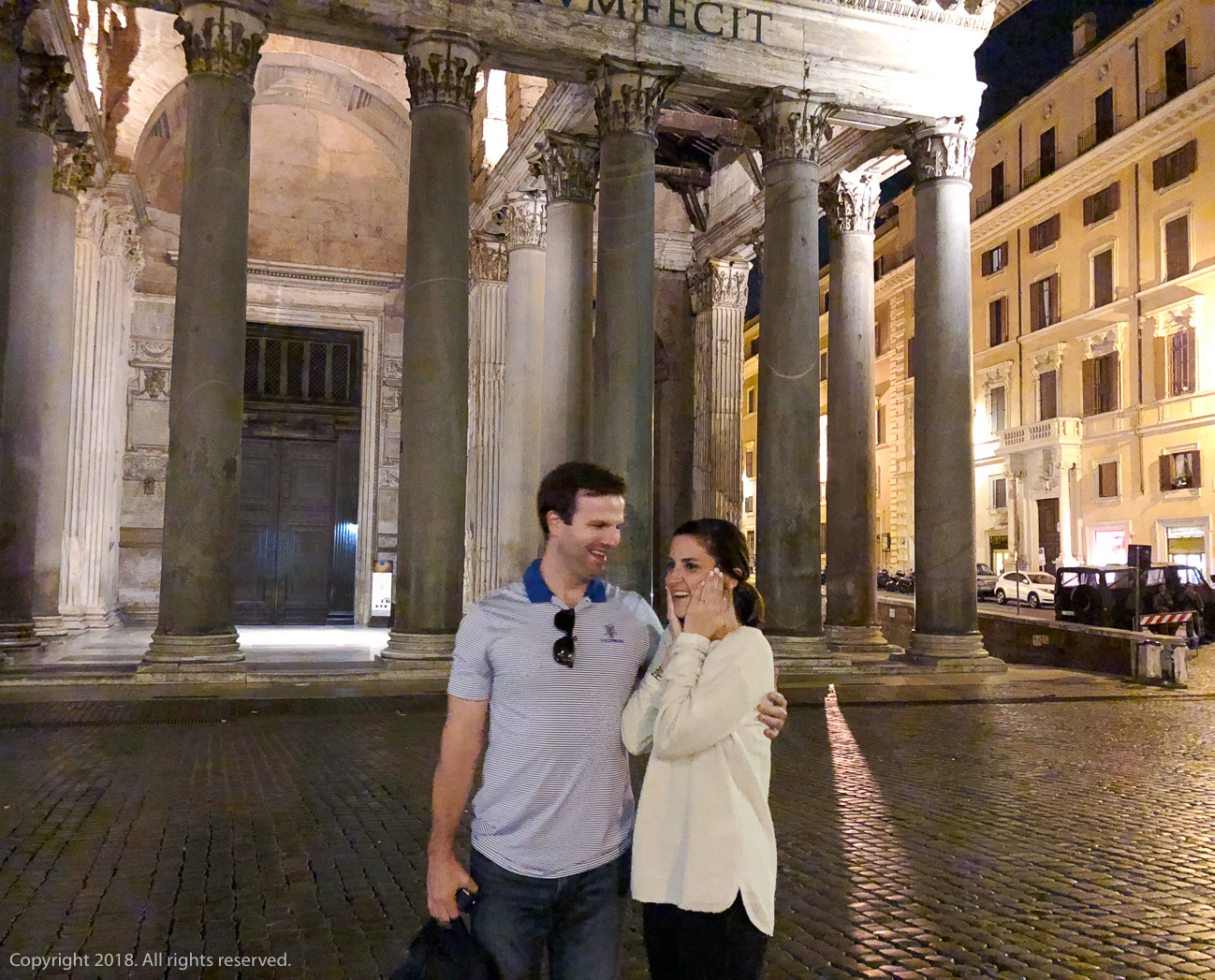 It’s the number one question Michael and I have been asked since we got engaged on April 22, 2018.  How did he propose?!  Since y’all are like an extension of my family here in this little corner of the internet, I wanted to share the details with you too!

If you haven’t read my Italy recap post, definitely check that out HERE first as it leads into our last night in Italy on our four day, whirlwind trip!

After spending three and half days with our friends, bouncing through northern Italy, tasting all the wine and eating all the food, Michael and I spent our last half-day alone in Rome.  We hit up all of the hot spots, St. Peter’s Square, the Spanish Steps, Trevi Fountain, and had a delicious Italian meal.

We sat there for close to two hours just sipping wine, people watching, and chatting.  As the night went on, the crowds started to clear a bit.  When it was getting close to midnight, we decided we better head back to our hotel since we had to catch our flight home to D.C. the next morning.

As we were getting up, Michael asked if I wanted to take one last photo in front of the Pantheon.  I never say no to a photo, so I stood patiently waiting while he approached a woman in a large group that had just gotten up from the steps as well to take our picture.

I noticed that she had a strong reaction when he asked, I could tell she was Italian, and she was shaking her hands and saying no, no, no … But then he said something else to her and she said, ah ok, “I speak English … “

Little did I know, Michael had shown her a text message that he had typed up.  It said, “I’m going to propose.  Will you take a pic?”

Right when Michael came back to get in the photo, he knelt down on one knee and asked me to marry him!

I blacked out.  (insert crying laughing emoji)  But for real, I remember saying (and he likes to remind me that I said this), what’s happening, what are you doing?!  Over and over.  It was probably only a few seconds, but honestly, everything is a blur.  I was so caught off guard.  A few seconds after I realized what actually WAS happening, I of course said yes!  Everyone still sitting on the steps started cheering, it was really magical and more perfect than anything I ever could have imagined.

After Michael thanked the lady, we wandered off and found the perfect spot to celebrate, which I’m pretty sure happened to be one of the only bars still open on that Sunday night – Salotto 42.  We had champagne and the bartenders forced shots on us once they figured out that I was crying HAPPY tears. 🙂

After celebrating for a bit, we made our way back to our hotel and called our parents and sisters to share the news!  We finally made it to bed around 3:30 in the morning, just in time to get a few hours of sleep before our 7:00 am alarm went off to head to the airport!

The Second Most Asked Question

The second most asked question we’ve received is, did I know it was coming?!  Kind of … Michael and I have been dating for about five and a half years.  We moved from Birmingham to D.C. together almost four years ago. We’ve been chatting about marriage for a while, but we were never in a rush to make it happen.

Before we left for Italy, I thought it might happen on this trip, but once we arrived in Italy, that thought completely left my mind.  Since we were only there for a few days, our days were slam packed.  We were going ninety miles an hour from 9:00 am to 2:00 am every single day.  So by the time we made it to our last day/night in Italy, it was the last thing on my mind.  Michael also pulled off some pretty good trickery throughout the trip to really throw me off of thinking it would happen.

I was totally surprised in the moment (hence the black out moment).  It was perfect! 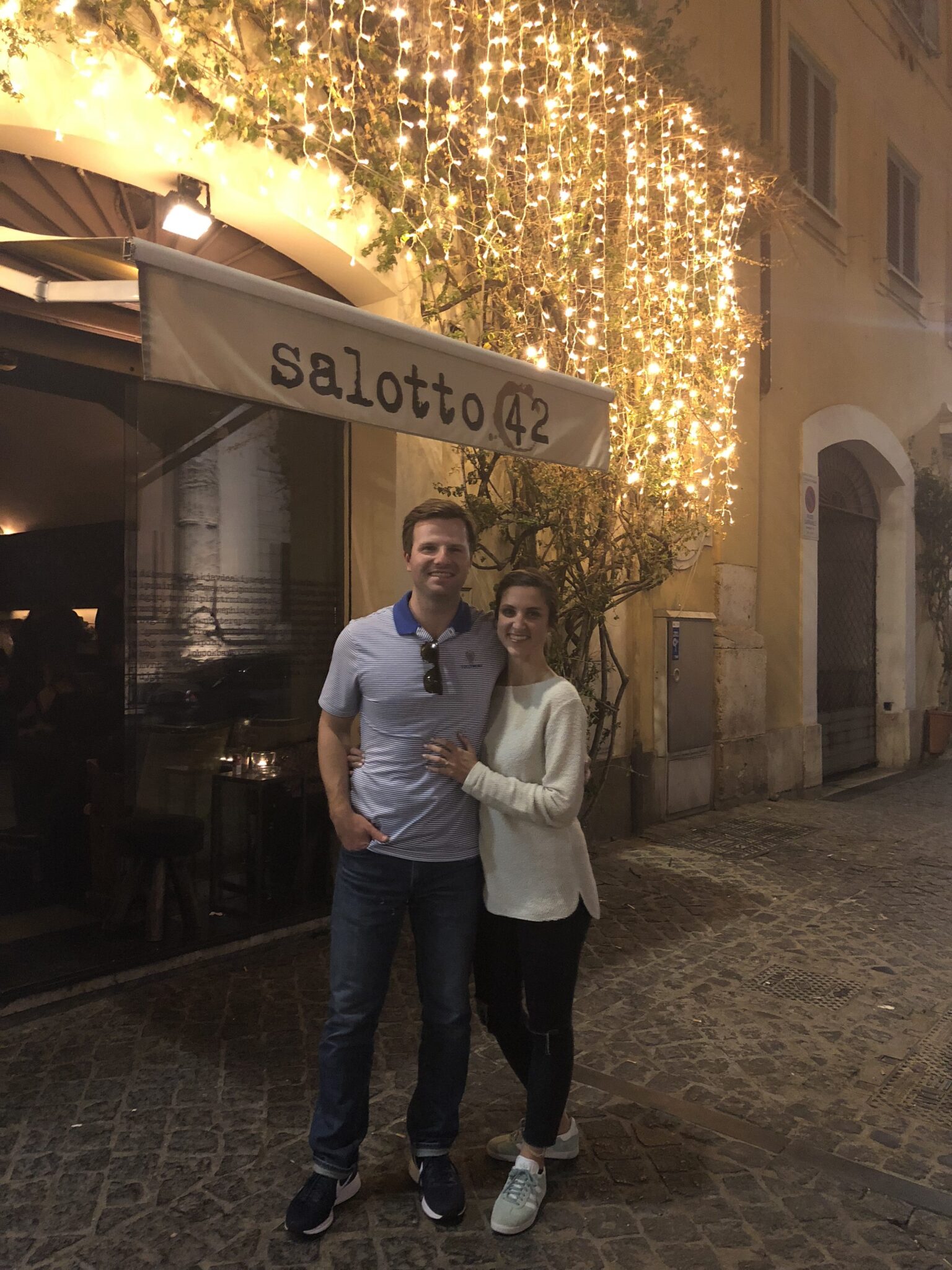